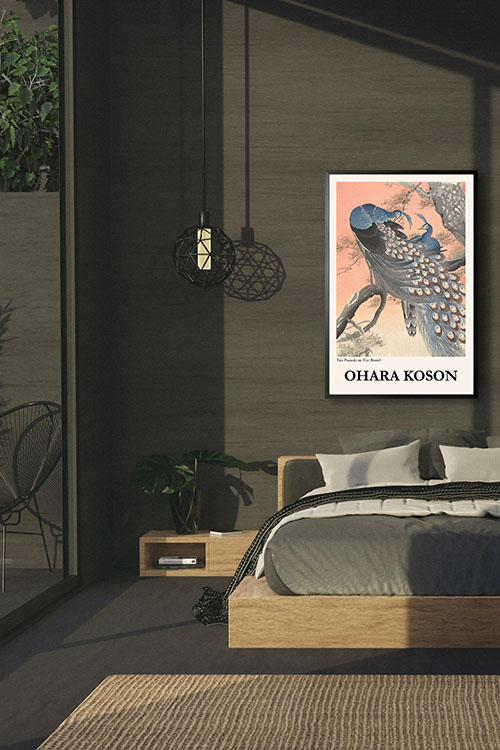 Ohara Koson is one of the popular printmakers for kacho-e in the 20th century. Kacho-e is the Japanese term for prints of birds and flowers. A well-known painter and woodblock print designer, he was able to create around 500 prints.

A brief biography of the artist

Ohara Koson was born in 1877 in Kanazawa in Ishikawa Prefecture in the North of Japan. He was originally called Ohara Matao and studied Japanese painting under Suzuki Koson. In 1904, he made Russo-Japanese war prints. However, during these times the popularity of the art of ukiyo-e is slowly dwindling. In contrast with the prints with scenes of the Sino-Japanese War, these were sold out within the day. 10 years, later, fans of the art became less and were eventually replaced by photography.

The art of Ohara Koson

Many viewers and fans of Ohara Koson would oftentimes compare the prints of birds and animals with those of watercolor art. The kacho-e of Ohara Koson was performed with expertise and a high degree of craftsmanship. This is observed through the details seen in the bird’s plumage.

Over the years, the artist used different signatures and seals such that the exact dating of his prints is difficult to determine. Many experts believe that the prints were made after 1923, the year after the great earthquake in Japan.

In addition to being a popular artist, Ohara Koson was also known for being a teacher at the Tokyo School of Fine Arts. One of his American colleagues, Ernest Fenellosa, convinced him to make woodblock prints in traditional style. As such, his first flower and bird prints in the tanzaku format were published by Matsuki Heikichi.

In 1926, Ohara Koson continued the design of kacho-e prints and most of these were published by Watanabe Shozaburo. Watanabe was the one who initiated the Shin Hanga movement. Almost all of the prints of Ohara Koson were exported to the USA. This was the time that Japan had lost its sense of traditional values.

Bring the art into your home

Giving your home a touch of nature is one of the best ways to make it look vibrant and refreshing. Framed posters of sceneries are one of the most common ways of achieving the goal. We all know that having a view of nature in our homes offers lots of benefits in terms of the ambiance and health.

Sometimes, having a personalized wall art of nature could boost the overall appearance of the interior. Philippine sceneries are usually displayed to give the interior an ample amount of shades of green. On the other hand, some owners would like to be unique with other nature-inspired art. The art of Ohara Koson is old in terms of the age of the art. However, they evoke a modern touch that is perfect with any interior design style. In fact, your home does not need to have that Asian look so that you can display the art of Koson.

The hues and shades seen in the images are rather subtle and will not overwhelm the style that your home has. Moreover, they can be displayed in any room, from the bedroom to the kitchen. If you are looking for a cool way to spruce up your room, then the art of Ohara Koson will give the look that will make your decorating project a success.