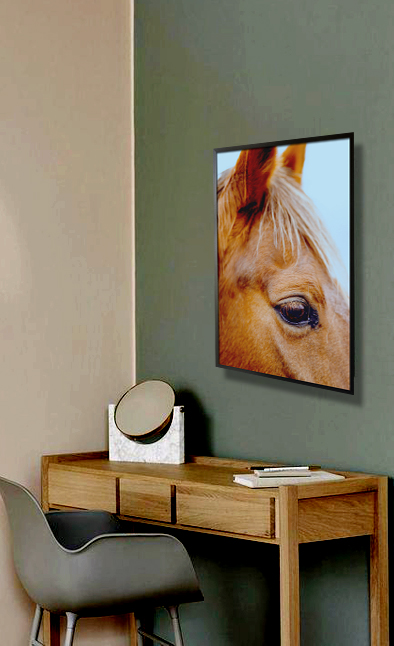 Horses are powerful animals that can be seen on every continent. These animals were present in many different cultures, they represent the same concepts of freedom and power. The animal is a universal symbol of freedom without restraint. As such, decorating your interior with horse posters is a good example of bringing power and strength into your own space.

Horse posters for your home

Horses have been part of the history of humanity. They are present on every continent on the planet. Though horses can be found in different cultures, their symbols are somehow similar. Horses printed on posters may be colorful and stunning. They may also appear in close up showing the beautiful wisdom in their eyes. Horses are unique and special animals and humans have been drawn to them for thousands of years.

Proper placement of posters in our homes can bring the power, strength, and energy of these revered animals. When displayed, the image of the horses brings the energy of success, fame, freedom, and speed.

Adding various horse posters on the walls of your room will help you feel energetic during the days when you feel a little fenced. Horse posters evoke a sense of freedom and energy. Horses are animal spirit guides and a sign that your soul is racing its way to enjoy and embrace freedom. The animal is an amazing and powerful beast and likewise represents your personal goals, ambitions, and desires. It is believed that when a horse dominates your awareness, there is more than enough motivation to carry you through anything.

Another amazing poster is the white horse. This animal has been featured repeatedly in global mythology. It is usually associated with a solar deity or heroes. This kind of horse poster will certainly look amazing in the living room and bedroom.

It is also believed that when someone dreams of a horse, it represents stamina, charisma, and sexual energies. It might also point to your future success, just like imagining yourself riding into town after a victory at war.

Horses are wonderful animals that are usually featured in films and stories. Horses are odd-toed ungulate mammals that have evolved over the past 45 to 55 million years. Studies have shown that humans began domesticating the animal as early as 4000 BC.

What is amazing about horses is that they have unique and interesting anatomy that allows them to make use of speed to escape predators. They also have a well-developed sense of balance and an intensive fight-or-flight response. Horses need these traits for them to successfully flee from predators.

Horses are generally divided into three groups, which are based on temperament. The spirited or hot blood with speed and endurance; cold blood, such as draft horse which are slow and suitable for heavy work; and the warmbloods, which are developed from the crosses between hot and cold blood.

For years, humans and horses have interacted with each other. This is exemplified by the various sports competitions, recreational activities, work activities, and others. They were also widely used in warfare as shown in historical records. Different variety of riding and driving techniques were eventually developed, with the use of equipment and methods of control.

Interestingly, many products are also based on horses. Examples are meat, milk, hide, hair, bone, and pharmaceuticals which are extracted from the urine of pregnant mares as well as blood serum.

In return to the services provided by horses, humans provide them with food, water, shelter as well as medical attention. These are particularly true with domesticated horses.