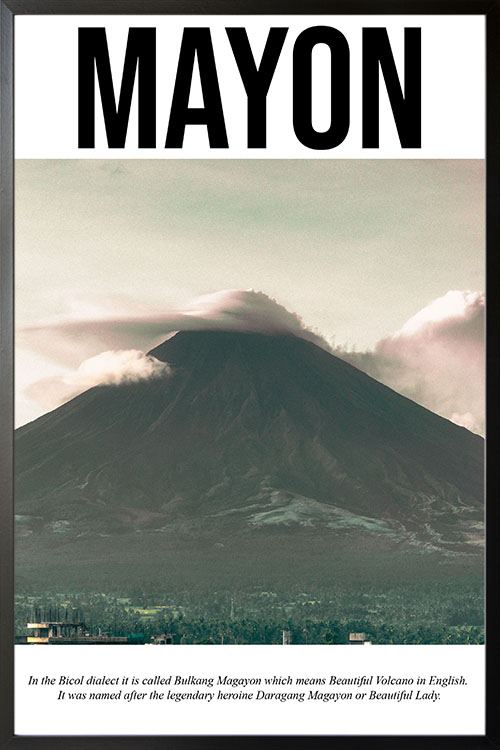 Artdesign gives you fantastic and trendy posters that will surely add life to your rooms. We have a wide range of poster designs that will suit your decoration needs. The Mayon poster is one of the impressive posters that will not only add to the aesthetics of your home. This can also be used in travel agency companies to promote tourism in the Philippines. Rean on to know more about the amazing volcano and how this print can boost the overall appearance of your rooms.

Mayon volcano, also known as Mount Mayon, is one of the active volcanoes in the Philippines. It is located in the province of Albay in Bicol region. It is considered to be one of the popular tourist destinations in the country due to its symmetric conical structure. Mayon volcano is also regarded to be a sacred mountain in Philippine mythology.

On July 20, 1938, Mayon volcano was declared to be the first national park in the Philippines. UNESCO declared the volcano as the centerpiece of the Albay Biosphere Reserve in 2016. A very active volcano that is constantly monitored by PHIVOLCS.

The Philippines is rich in culture and tradition as well as numerous practices. In Philippine mythology, interesting stories are told that explain the origins of various things including landscape and waterscape.

The myth of the origin of Mayon volcano is as interesting as the love stories that you have read or watched on television. It tells the story of star-crossed lovers that has a tragic ending, thus giving birth to the crown jewel of Albay.

The legend is about the beautiful maiden, Magayon, who lived in Ibalon. She is also the daughter of the chief of the tribe, Makusog. Men from different places were so enamored by her beauty that they visited Ibalon just to get a glimpse of the maiden.

One of the suitors was Pagtuga, a warrior and chief of Iraga, who tried to court Magayon by bringing various kinds of precious treasures, like gold, and jewels. However, Magayon was not moved by this gesture.

Magayon also loved to bathe in the Yawa river. While bathing, the maiden slipped on the rocks and almost drowned if not for the help of Pangaronon who saved her. This led to a good relationship between the two characters. Magayon eventually asked Makusog for Magayon’s hand in marriage. This was immediately approved by Makusog as he wished only for the happiness of her daughter.

The news about the wedding reached Pagtuga who then kidnapped Makusog and threatened to kill him if Magayon refused to marry Pagtuga. As such, Magayon married Pagtuga to save her father.

While kneeling and watching Magayon die, Pangaronon was stabbed by the soldiers of Pagtuga. The two lovers were buried together. Years have passed and the people observed that the land where the lovers were buried started to rise. The mountain that rose from the burial site is now known as Mayon Volcano.

Beauty and a touch of nature on your walls

The Mayon poster is one of the prides of Artdesign. It is a multifunctional art that can easily be displayed on the walls. The natural colors and image of the volcano can instantly add a touch of nature to your space. The display of the poster can also show your love and admiration for the famous destination of the country.