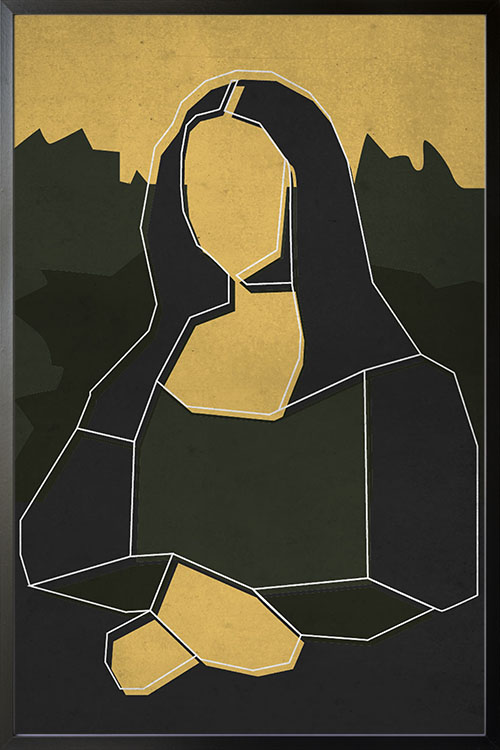 Add the legendary artwork of the world-renowned Italian Renaissance painter, Leonardo da Vinci to your home. This time in a more contemporary appearance as it is depicted in a geometric fashion. The Mona Lisa is one of the greatest and mysterious accomplishments of da Vinci. This trendy poster will not only bring the classic to your interior. It will also add a contemporary touch that will make any room look trendy and stylish.

There is something unique and interesting with classic art displayed in your room. Art enthusiasts and collectors will likewise be captivated and mesmerized by the beauty these artworks emit in their gallery. The poster version of the popular art, The Mona Lisa, is beautiful as it is with the original painting. It was redesigned in such a way that it can give a modern vibe without omitting the classic touch. This art can likewise give any room a remarkable and spectacular view.

The Mona Lisa – a brief description

The Mona Lisa or la Gioconda is a half-length portrait by the Italian Renaissance artist Leonardo da Vinci. It has been described as the best known, the most visited, the most written about, the most sung about, the most parodied work of art in the world.

The figure of a woman dressed in the Florentine fashion of her day and seated in a visionary mountainous landscape clearly shows Leonardo’s sfumato technique of soft, heavily shaded modeling. The mysterious smile and unproven identity have made the painting a source of ongoing investigation and fascination. The sense of overall harmony achieved by Leonardo in the painting reflects Leonardo’s idea of the cosmic link between humanity and nature.

Leonardo di ser Piero da Vinci (1452-1519) was an Italian Renaissance polymath who was extremely interested in invention, painting, sculpting, architecture, science, music, mathematics, engineering, literature, anatomy, geology, astronomy, botany, writing, history and cartography. He was also considered to be one of the greatest painters of all time.

In addition to these, Leonardo was known for his technological ingenuity. He was able to develop concepts about flying machines, concentrated solar power, double hulls, among others. However, only a few of his designs materialized or became feasible during his time since modern science was only just beginning during the Renaissance period. He also made significant discoveries in anatomy, civil engineering, geology, optics, and hydrodynamics. However, his discoveries and findings were never published and never directly influenced modern science.

Among his greatest works that made an impact on modern art and thinking were the Mona Lisa, the Last Supper, and the Vitruvian Man. Other paintings have also challenged the minds and beliefs of many individuals, as well as religious beliefs just like subjects and themes of some of his paintings, became controversial.

Classic-themed posters are not only about bringing the past to the present. It is also about immortalizing the works of art. These artworks share a lot of stories with the world. The Mona Lisa, for instance, has something mysterious about it that stimulates the mind of the viewer. If you are having a hard time understanding the meaning of the art, it is great that you appreciate it and love the effects they give to your space.